A Northside Tribute To The Minneapolis Fire Department... 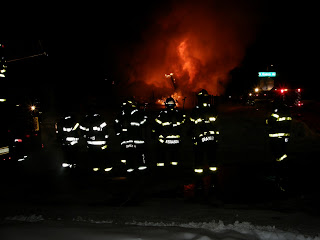 From the other side of the world, Megan Goodmundson drew my attention to this photo taken the night of a house fire at 2031 Queen Ave. N.

Recently, Megan was flipping through her computer and came across this photo. Neither of us realized what an eerie, compelling image we had captured of the dedication of these Minneapolis Fire Department personnel. (To get a bigger view of the image, click on the image)

Due to the fact we repeatedly swapped Megan's camera back and forth that night, neither of us can be sure who took the picture.

In Minneapolis, firemen not only fight fires but board buildings, perform some of the multi-unit housing inspections, water newly-planted trees, act as medical first responders and, above and beyond all that, the Northside fire station on Lowry and Morgan has a "green roof."

Megan tells me if any of the firefighters in the photo would like an actual glossy copy of this photo, she can take care of that...she just needs their names and contact info.

We know folks at City Hall read this blog so hint hint.

Dear North End Hardware, THANK YOU FOR THE T-SHIRT 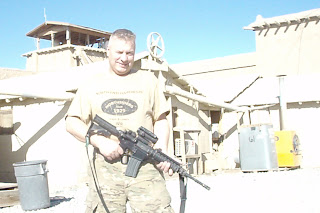 Photo by a comrade-in-arms, blog post by John Hoff


My friend Megan Goodmundson tried to buy a shirt for me at North End Hardware, but it turned out her money was no good. North End Hardware GAVE her the shirt, which Megan mailed to me here in Afghanistan in a care package.

One really cool aspect of the shirt is...


...it's the exact same brown as an army issue t-shirt, and the collar is similar. So I can wear it under my uniform as a spare when my army t-shirts are at the laundry. I can also wear it at night, on guard duty, as an extra layer under my thermal shirt. That way I can tell myself, "If I go down, at least they'll know I was Johnny Northside to the end." I can also wear the shirt to bed, since no particular "bed uniform" is required. Except at night, in bed, we are always in uniform. And, for that matter, always armed.

As much as I love this shirt, when I leave this country some months from now I won't be bringing the shirt home. Rather, some Afghan will end up wearing it. They simply don't have enough warm clothes, so they are happy to "layer up" with several secondhand American t-shirts.

Heck, I'm sure more than a few Afghan babies in the nearby village use brown Post Exchange (PX) towels for baby blankets.

However, I really really love the shirt. So, North End Hardware, be assured that I will wear it and wear it and then, hopefully, I will get a picture of the Afghan who ultimately inherits it when it's very nearly worn out.