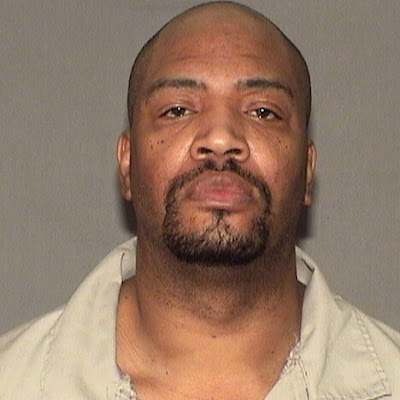 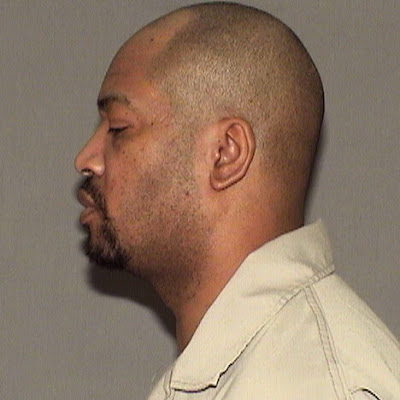 Derrick Trevor Griffin was the North Minneapolis minister who shocked an almost unshockable neighborhood when he murdered Kris Miller, the result of a love triangle and a fit of jealousy according to the theory of Hennepin County prosecutors. Click here for article.

And here is his mugshot, taken around his admit date of March 29. Look closely. I believe you can see tears in the eyes of Griffin as the reality hits him: "This is the prison mug shot ceremony. Soon after taking my picture they will escort me to a cell where I will spend the rest of my life."

It's tragic. And I have to wonder how a man who kills another man in a fit of jealousy over an estranged wife goes to jail for life, while somebody like Marlon Alexaxandro Lozano-Montano, who paralyzed a 12-year-old child in a drive by shooting, receives only 13 years in prison. The young woman, who is now 13, will be around 26 years old when her shooter is released. She will have many years to live with the knowledge that her shooter is running around on two good legs, living his life.

Well, I suppose there is no perfect way to sentence wrongdoing. Better not to engage in the wrongdoing that requires the sentence.

Now, a word about publishing mugshots.

For a long time, this blogger has performed a very simple public service of making mugshots available online. You see, the online "offender locator" at the Minnesota Department of Corrections isn't "crawled by Googlebots" and so these documents have to be more or less pried loose and put on the internet.

Why a public website paid for with tax dollars would have data deliberately made inaccessible to search engine programs is a whole 'nuther debate.


...for a few years, this blog has filled the gap between so-called public data versus actual public knowledge and easy access. I have done this simply by seeking out and publishing the mugshots in question.

Because of what I do, anybody searching Google for "images" can easily turn up (for example) Derrick Trevor Griffin, instead of having to laboriously seek out the image by going to the MN DOC offender locator, if they even KNOW to go there.

So I do the digging and my audience has convenient access to the info. It's why I'm here. It's why this blog exists, to disseminate Northside information and (to a lesser extent) opinion under the broad banner of neighborhood revitalization.

Sometimes I've done blog posts which simply say, "Here is the mug shot for so-and-so, who was recently imprisoned. Here's what (fill in the blank) looked like when booked into prison."

I feel these simple images are informative, as together we try to "read the face" in a very primal and human way. So for a couple years, it was socially useful to write blog postings saying, more or less, "Here is the mug shot."

However, recently online sites like "Mug Shots Dot Com" have begun to publish these images systematically. I do not do business in the same way as these sites. I don't offer to take down the mug shot for money. I have some severe reservations about Mug Shots Dot Com and similar sites, but the fact is they've eaten a portion of my lunch just like I try to "eat the lunch" of mainstream media by digging deeper, by obtaining facts they don't have.

Ah, well. It's one big "media ecosystem" and we all evolve or die.

Thanks to Mugshots.com, I can no longer be the one who says, "Here's the mug shot, behold, for the first time made public and accessible to easy online searches."

Heck, even if I get the mug shot more quickly, what's the point? Mugshots.com will get it EVENTUALLY and their search results will score higher on Google because they are, like, AN EMPIRE devoted to this ONE SPECIFIC FORM OF INFO.

Obviously, I will still use mug shots (taken directly from MN DOC or similar public sources, not Mug Shots Dot Com) to illustrate blog postings touching upon a particular person's crimes. But this mug shot for Derrick Trevor Griffin will be the very last Johnny Northside "here is the mug shot, behold" posting.

Something very similar is happening with jailhouse roster data and one day in the foreseeable future it won't be necessary for me to post the unedited, raw roster data, click here for that discussion.

Despite reservations about how these sites do business, I actually welcome these developments. Publishing mugshots and raw jailhouse roster data is a somewhat mechanical process, not terribly fun or creative, merely necessary...like when print media in a small town publishes the "police blotter." But I prefer to dig deeply into the data, match it with other data, and publish stories derived from that process, i.e. "Jailhouse Roster nuggets," click for an example.

Sigh. It's the end of an era that I didn't even know we were in. Stop and enjoy today's music, my friends, one day they'll be playing it on a golden oldie channel.

Thanks for posting Derrick Griffin's mugshot. I live just houses down from where Mr. Griffin gunned down his prey. I was a witness for the defense in the murder trial. It wasn't a big deal. I heard the gunshots, saw the car, called 911 and reported it. However, the man murdered was named Kristopher Miller. Kris Miller. Thanks.

You are correct. Craig is a relative who was quoted in an article. That's where the mixup occurred.

So I am correcting this blog post accordingly. Thank you so much for contributing to my accuracy and for your brave act of good citizenship, which you humbly characterize as "no big deal."

Thanks and oops, I was a witness for the prosecution, not the defense. D'oh!

You will have to explain that to me. I haven't written about this case much and don't know all the details. If you want to elaborate on what you're saying, please do so.

And by the way:

PAID. If I PAID attention.

And "he could have killed him"?

My word, back in middle school somebody was out smoking blunts on the corner instead of learning picky rules about pronouns, hmmmm?

This was a very odd set of circumstances was the wife some sort of slut or what?? Sleeping with both the guys that work at the juke joint? However, I do feel the punishment was harsh but it could be his lawyer was inadequate and if that is the case than he has a sure shot at an appeal and should surely exercise it. #Bless his heart!! He couldn't turn a you know what into a housewife!!

His peers sentenced him to what they thought was justified! And I agree..If you do the crime you do the time. He didn't batter this individual, he killed him in cold blood, for which he should spend the rest of his life for taking another.Harsh? Harsh is slaying someone out of anger and jealousy!!

What kind of preach has and open relationship with his wife and he sees other women and drinks. Who follows a man with no direction of his own.

I am Kris Miller's older brother. I sat through the entire trial. I was a childhood friend to the defendant. With that, I truly believe he is guilty. The car caught on camera match his car exactly. This had nothing to do with his race as I've heard countless times. He did it, period. He exhausted his appeal and lost. I agree he could chosen a better attorney.
In my opinion his wife should be in jail too.

I find it extremely distasteful that his wife is on Facebook cursing like the trash she is & taking no ownership for her role in this. I agree with the victim's brother that she should be in jail too. It also appears that murder seems to surround her. I'd be interested to hear of her shady past. By the way, her Facebook name is "Kim Stillstandn White-Griffin." She had a whole bunch to say after the show aired on tv. She's a lousy piece of worthless gutter trash.

Sure wish "anonymous" would have tried to explain it. Wow. Dude was obviously guilty.

Also, I couldn't find that Facebook profile. If you can pull it up please provide a link to that, too.

Investigation Discovery (at least I think that's the channel) aired a reenactment of the events. I believe it may have been one of the "Obsession: Dark Desires" episodes. I can't find it right now. I have it on DVR. When I get home tomorrow, I'll confirm that for you.

There's a "comment" under this article that mentions how her first husband was killed as a result of a love triangle. Her son was also murdered.

Even using that link to Facebook I'm not able to get the actual page. It's some kind of odd little summary document of a Facebook page.


Bio
I keep it real, I keep it true no matta what. If you can't handle that, "Kick Rocks". To the folks that love talkin about me behind my back, its cool, its easier for you to kiss my ass! Haters are my motivator....

I'll just copy and paste her actual comments. Also, here's a link to the show that aired the reenactment of this horrible crime. This is the actual full episode: http://www.tvoneonline.com/content/tvone_site1/en/shows/fatal-attraction/video/fatal-attraction--full-episode--the-sinner-and-the-saint.touch.html

It aired on TVOne on a show called Fatal Attraction. The episode is "The Sinner and the Saint."

To "Anonymous" from the Feb 25th post. No one can say anything to her trashy face because she ran out of town and is hiding under a rock somewhere. I'm glad that piece of filth left the city.

Just watched this on Fatal Attraction and was very disheartened. This is one of those strange incidents that just leaves you dumbfounded plus why is it always good people