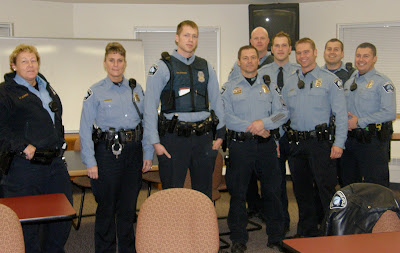 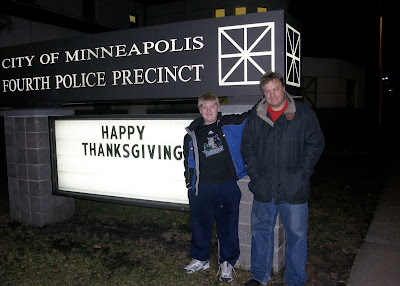 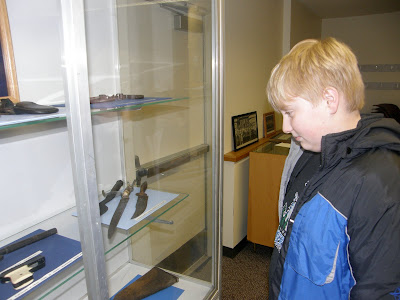 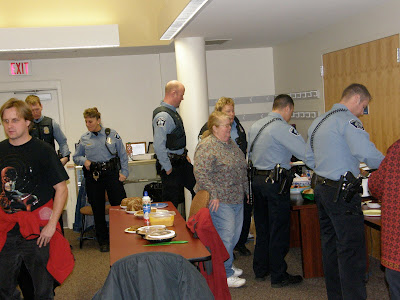 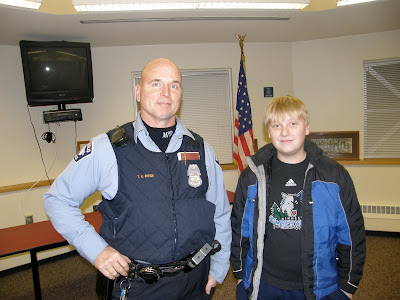 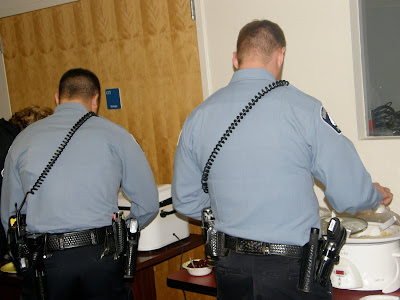 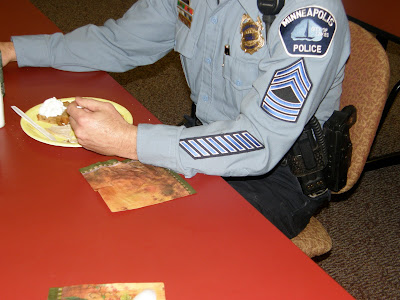 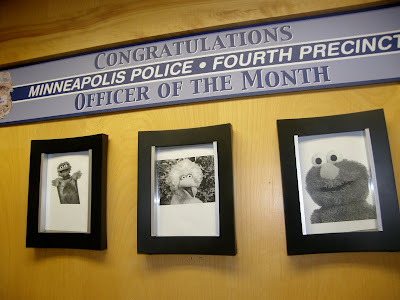 Photos By John Hoff, and contributed photos xoxo
The tradition is not quite as old as Thanksgiving itself, but for several years residents of the Fourth Precinct have been putting on a meal for the police officers as a show of gratitude. Joan Thom, head of the Public Safety Committee in the Hawthorne Neighborhood, and her husband, Len Lewis, as well as "Buzzy" Bohn have been the ones to take the lead in putting on the annual dinner.

The dinner doesn't happen just once on Thanksgiving, but serves all three shifts. Numerous Northside residents contribute items to the dinner and are involved in its preparation. I don't have a list of all the different residents and their contributions, but off the top of my head I know Housing Director Jeff Skrenes made an incredible fruit salad and Jordan resident Megan Goodmundson contributed pumpkin pies. Oh, do I know about those pies. For two days, I had to transport those pies around, careful not to crumble the crust in the slightest bit. Megan called them her "police pies" and reminded me not to commit (even by accident) "police pie brutality."

Megan was preparing to make homemade pies, but when she saw pies for $2.88 at Cub Foods on West Broadway, she was all, like, "I can't MAKE pies that cheap." So, being a frugal Nomi homie, she bought the pies instead. This was Megan's first year at the dinner, and she says she wants to go every year from now on.

This was also the first year I attended, along with my 12-year-old son, during the "mid-shift" dinner...

Two of the officers at mid-shift were not from the Fourth Precinct, but with a K9 unit that sees action all over the city. Here's video from YouTube of one of these officers in action, click here to see Officer Edwards and her four-legged partner, Chief.

One Fourth Precinct officer was a former member of a SWAT unit and not only chatted with us at length, but also posed for a photo with my son. Another officer had a lot of stripes and medals on his uniform, which he jokingly referred to as "bling."

My son took note of an interesting display case, full of old and unusual weapons taken off suspects.

In chatting with the officers, two themes emerged. The Fourth Precinct appreciated the show of gratitude (or, to put it another way, they were grateful for the show of appreciation) and, secondly, there was common agreement things have really turned around in North Minneapolis.

The officers were there long enough to eat a meal and chat a bit, but then they went right back out on the street to keep everybody else safe as citizens enjoyed their own Thanksgiving. One young officer remarked to his partner that he was going to hit the "stair climber" machine before leaving, so he could work off part of the dinner.

That's part of the reason why he's a police officer, and I'm just a blogger.

Posted by Johnny Northside at 10:51 AM

These officers were really fun to mingle with. What great men and women we have out there working hard while we are all busy living life. Thank you.

Man, I gotta tell ya', I never want to be on that former SWAT officer's bad list. (The one pictured with Alex) - although he was very nice to chat with.

The two K9 officers are total idols of mine, one of my most commonly used sayings "Q: What's better (hotter) than a cop?? A: A cop with a dog."

I also enjoyed chatting with Mary, resident of Folwell neighborhood who is active, even serves on the city's Animal Care & Control Advisory Board, which is sponsored by my favorite councilman, Don Samuels, of course.

I enjoyed hearing her story of how she took some investigative steps on her own to find some 'money man' silent financial partner of a local slumlord of a tri-plex up by her house. She called him up and gave him hell. Go Mary, a lady after my own heart, kindred spirits! Take care up there in Folwell and tell your neighbor Amy that we are all in this together!

And just as much as I'm grateful for these cops, I'm grateful for wonderful neighbors like Joan and Len, Buzzy Bohn, Yvonne from Hawthorne, Mary, Jeff, John and his son Alex and all the other neighbors that helped make the cops' working holiday a little easier to get through. You guys make living in NoMi the greatest place in the City.

Is there a Christmas dinner for the police as well? I really lke this idea& I would lke to get involved!

@Anon 939 - I'm not sure if something like this is done on Christmas as well - I'll try to find out for you.

I'm not around to help on Christmas but if I were, I'd get something going.

Maybe start asking around your neighbors and neighborhood organization and see if people want to help organize something. Even bringing pies, cookie trays and desserts would be a nice gesture.

I'll see what I can find out.

we thank you as well... as nice as a gesture as the food is, its knowing that people support us is much more important.

I have not given up hope on NoMi. The vast majority of people are great and wonderful people. Most of us coppers still believe that.

The best piece of advice I can give, is that if you're "wondering if I should call the police?" that's the time to call. if there is a question, there is no question.

Sure, we can't always make a "great pinch" every single time (we're limited by the law as to what we can and cannot do, what we can "prove" in a court of law and what we cannot) but at the very least we can scare them off... keep calling!
-just a cop