A Disappearing Story In The Minneapolis Mirror... 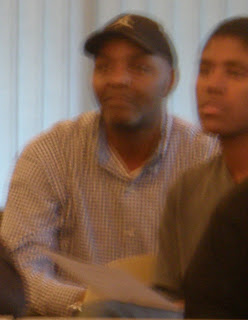 I seldom have a reason to read Mpls Mirror--an internet publication which somehow manages to get stories twisted regardless of what the story is actually ABOUT, always with some kind of "guilty liberal" emphasis--but last night I noticed Terry Yzaguirre from Mpls Mirror at Al McFarlane's WHO meeting. I had to wonder how Mpls Mirror would spin McFarlane's dog-and-pony show starring "Uncle" Lennie Chism, so around lunch time I actually went to take a look in the Mirror.

Well, what to my wondering eyes should appear but a stock photo of Al Flowers, and a story about Flowers' proposed settlement with the City of Minneapolis for the latest in Flowers' string of ridiculous lawsuits; in this case suing Council Member Samuels for supposedly stepping on Flowers' toes when, really, videotape of the incident makes it pretty clear Flowers was the aggressive party. The amazing story in the Mpls Mirror had the ENTIRE PROPOSED SETTLEMENT as part of the body of the text, including stuff like...

...Flowers and Samuels will stay ten feet apart or, if they must pass near each other, they will do so quickly and without contact. They will not make (and I quote) "picayunish complaints" about minor and harmless violations of the agreement.

When I saw that word "picayunish" I thought to myself, "Oh, this proposed settlement must have been drafted by Flowers' attorney, Jill Clark. She is the only person I know who is always using the words 'picayune' and 'picayunish,' and those aren't very common words."

The story was so interesting to me that I actually submitted a comment pointing out that, really, if the settlement had any chance of being accepted it certainly wouldn't have been circulated prior to agreement by both of the parties. I also called up a well-connected friend to get his/her reaction to the story. The friend skimmed the story, planning to read it more later. And then, hours later...

THE STORY DISAPPEARED OFF THE MPLS MIRROR. Poof!!!!!

You have to wonder about a thing like that, particularly when the story was about a proposed legal settlement and had all the proposed terms, word-for-word, like it was copied and pasted from the original document. Consider a few pertinent questions, if you will: which side of the lawsuit was more likely to circulate the terms of a proposed settlement? The city attorneys? Or Al "I Am The Community" Flowers?

Furthermore, if an attorney circulates the terms of a proposed settlement in the media while both sides are still talking about settlement, what lawyer would want to engage in settlement talks with her in the future? So a story appearing on a website and then abruptly disappearing...you have to wonder what's going on behind-the-scenes?

On the bright side, the Mpls Mirror now has a great story about Al Flowers. It seems poor Al Flowers is much-picked-upon by the City of Minneapolis, which condemned his house for lack of running water.

Too bad there's no indication Flowers will gain some kind of big, fat settlement to work on those issues. The City Council appears to be holding the line.

While it's true things do often appear and disappear from the internet--particularly if these things aren't up for a while, and no "Googlebot" snaps an image for the "Googlecache"--but sometimes I feel like an explanation for missing material is warranted.

This is certainly one of those instances.
Posted by Johnny Northside at 12:55 AM

what is a "bug fat settlement"? Is is an oversized roach motel turned into a real estate investment for those who are into flipping property still?

Thanks for catching the typo, I fixed it, though "bug fat" is the part of the bug which makes it taste delicious.

Come on JNS readers! Is there anyone who can track down that text or document?

Inquiring minds want the kind of levity that only Jill Clark and Al Flowers can bring to NoMi.

Jill Clark is a singer? And she sells her CD on ebay???