JNS BLOG EXCLUSIVE: Northside Marketing Task Force To Have Website "Up Within A Few Hours" 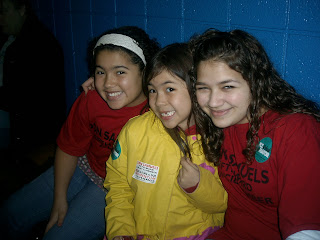 A reliable source informs me that Northside Marketing Task Force (NMTF) will have a website up "within a few hours." The timing may be unrelated to this weekend's Northside Art FLOW, where the ever-increasing strengths of our NoMi neighborhood will be on display, but the timing does work out pretty well.

Meanwhile, in another NMTF matter...

...IBNN blogger Don Allen, a former board member of NMTF, reiterated by email his request to be reinstated to NMTF.

ADDENDUM: February 6, 2011. This blog post was written before I and many others in North Minneapolis discovered what a disreputable con man character Don Allen is. I would advise anybody: Do not trust Don Allen. Seek further information about Don Allen from various online sources before having any contact with him.

Posted by Johnny Northside at 3:40 PM

Email ThisBlogThis!Share to TwitterShare to FacebookShare to Pinterest
Labels: marketing

John, did 1564 Hillside come down? Our letter stated it would demolished on or before the 20th of July. I thought you might have blogged about it if it had, so I'm curious. We thought to drive over and take a look but if you get this message, let me know what's happening!!
Mel

As far as I know, it hasn't come down. If it had, my contacts in that area would be burning up the lines with phone calls and emails, sending me pictures, etc. In my experience, these announced demolition dates have a lot of flexibility.

My sources say that the NMTF has been hijacked by Georganne Yantos and Susan Bendickson, who are staring down the barrel of a lawsuit for violating so many board procedures that it makes the head spin.

My sources also say that you know all about this mess JNS, so why are you keeping this information from the public?

It's funny how you pick which issues to be outraged about.

The only person weak enough right now to be BOARD-JACKED by Yantos would be JERRY L. MOORE!!!!

So where's the url?

I don't have it quite yet. When I have it, I'll be sure to publicize it.

1) You might want to wander by Mr. Slummy's mega duplex to be at 2515 3rd St. N..- He's got roof trusses with a hole big enough in them to fit a couple more bedrooms in the attic. If this is going to be a duplex, it'll have at least 10 bedrooms before he even starts hacking them up into more bedrooms! Does section 8 pay more for more than 5 bedrooms?

2) Please don't trash Georgiana Yantos- she's been a hardworking volunteer here in Hawthorne for decades and we need her. I think you've gotten a bit personal on the blog of late, and getting dragged down in personality conflicts does the Northside no good. Yes, please go after the slimey criminals, but don't waste your good blog attacking citizens just because you disagree with them.

Wait, wait, wait! When did I attack Yantos? I have no problem with Yantos and I get along great with her. I assume that comment was directed at the anonymous commenter who mentioned Yantos, not me.

G. Yantos puts an unbelievable amount of (good) energy into Hawthorne and the northside in general, her contributions will ripple on for years and years and years.

Are we talking about THIS Yantos, when you state "I took it to mean that because Yantos is so kind, and gentle, and good natured"?

Maybe we have different opinions on just what an "unbelievable amount of (good) energy" is when referring to Ms. Yantos.

Hey Anon, BIG EFF'ING DEAL.... So G.Yantos has some court matter with a disputed will..... ooooooo that's so shady!!! Such bad energy!!!!

I didn't even waste more than 5 seconds glancing over that link you posted. It's Yantos' business and not NoMi's business...

We all have private matters in our lives that DON'T pertain to our involvement in our neighborhood revitalization. Guess what, I got personal private matters, too.

If it's not related then it's not fair game.

So how about you show some civility and let's stick to NoMi issues. Aren't we all adults here?

I was going to say something like that but...well, thanks, you got there first.

Anybody have the URL for the new NMTF website?

"We all have private matters in our lives that DON'T pertain to our involvement in our neighborhood revitalization. Guess what, I got personal private matters, too.

If it's not related then it's not fair game."

EXACTLY! So you and Johnny Northside AGREE that allowing posters to make slanderous and unsubstantiated claims about someone's personal life (Ex: J Moore, among others) is NOT fair game.

So why do you allow such comments to make it to your thread Johnny?

Maybe when you start to moderate hurtful comments, in addition to not making personal attacks yourself, we can see the 'adult' behavior in this blog.

We're talking John Hoff however, who can't seem to resist blogging personal insults, so I won't hold my breath waiting.

In regard to Jerry Moore, I refer you to my attorney, Al Goins. However, I have never printed anything slanderous or unsubstantiated about Jerry Moore. Truth is an absolute defense.

As for the other thing...and, gee, I wonder which one of approximately TWO people in the world posted that stuff about Ms. Yantos?...the court case about some kind of settlement of an estate is too dry for me to even finish perusing. Nobody cares about it or thinks badly of Ms. Yantos for being involved in some boring civil matter about settling an estate. WHO CARES?

I am, however, committed to an open forum.

Gee, first I'm criticized because supposedly I don't allow criticism (though I always did!) and now it's like, oh, I don't "moderate" negative comments.

I'm off to another thread to post a few more letters on Mortgage Fraud Wheel of Fortune.

Point out some FALSE/WRONG stuff that Johnny Northside has posted (his blog post body, or comments with his name attached) and then let's take it piece by piece... this should be a fun game... what gameshow can we model this one after???

JNS, I think you're missing the commentors point entirely. The question is why do you allow/post submissions from your readers that contains slander of anyone, instead of sticking to just community issues?

I think you're throwing that word "slander" around a little too freely. "Slander" is not defined as "truth that hurts."

It's amazing to me how broadly some want to define what is "personal." Take, for example, those who say it is a "personal attack" to point out that Lennie Chism can't maintain his (former) property at 1901 Glenwood when he wants to take on another big property project. That's much too broad of a definition of the word "personal" when it's quite relevant how he maintains his property.

'JNS, I think you're missing the commentors point entirely. The question is why do you allow/post submissions from your readers that contains slander of anyone, instead of sticking to just community issues?

You mean name calling and talking about one's personal life in an offensive fashion is not slander?

In a previous post you said you did not allow a comment that was offensive about a friend of yours. What's the difference?

The particular comment in question was purely personal in nature and made no connection at all to any neighborhood issue. It was, furthermore, of an insulting and sexual nature. Therefore I decided not to publish THAT particular comment.

This is a very rare event--for me not to publish a comment--but if I get trolls hanging around here, I could switch in a red hot second.

Shouldn't you be talking to me through your attorney? Ha ha ha.