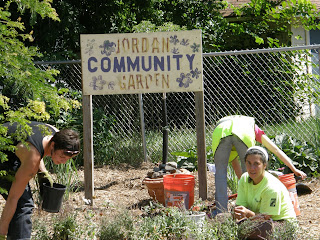 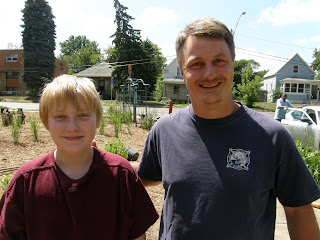 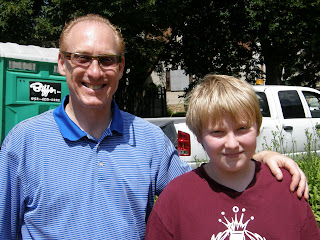 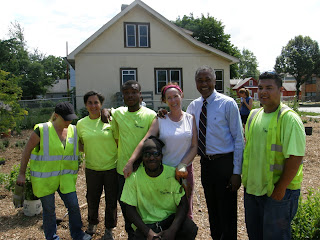 There is a story everybody in the Jordan Neighborhood knows about the Jordan Riot of 2002: during the violence, not even one petal on a flower was harmed in the Community Garden, which was in the very heart of the civil disturbance.
Oh, sure, a few garden stones were ripped out to throw at police cars or whatever, but the flowers were unharmed because even the drug-dealing gangs respected the garden. After all, their own children helped plant flowers, side-by-side with the forces of neighborhood revitalization there at the intersection of Knox and 26th.

Now 26th Ave. N. is so peaceful that I often walk or bike where, at one time, many residents were afraid to drive in vehicles. Shot spotters, video cameras, dedicated police work, and just a little bit of silver lining from the dark cloud of the foreclosure crisis are all responsible for these positive changes.

The Jordan Garden was, however, always a humble little patch of ground. The efforts to plant and maintain the green space were, one might say, "grass roots." But now Jordan Community Garden is getting a dramatic makeover with help from Tree Trust and the Pohlad Foundation...


These photos show some of the people and good feeling apparent yesterday in the garden. From top to bottom, here's who's who and what's going on.

First, word is the old sign (created in approximately 2003) is not going ANYWHERE. Just because there are improvements doesn't mean everything changes.

In the next photo, Stu Ackerberg of the Ackerberg Group posing with my son. Stu has been doing incredible things to renovate West Broadway. But in our brief conversation, I also learned that (more importantly) he's a dedicated father.

The last photo shows Council Member Don Samuels, Terri Egge of the Pohlad Foundation, and a bunch of Tree Trust volunteers. The house in the background is 1716 26th Ave. N., the flashpoint of the Jordan Riot. The story of the riot has been told again and again, but each time I've heard the story from residents of the neighborhood, this particular piece of information has been emphasized:

Yes, the police made a mistake during the raid and a child was injured. However, drugs were dealt CONSTANTLY at the house and the people who lived there were affiliated with a gang. The Jordan Riot wasn't a "people's uprising" so much as criminal resistance against law and order.

So what happened as a result?

"First, word is the original sign is not going ANYWHERE."

Johnny, that's not the orignal garden sign.... I should know, I build it and paid for the materials to do so.

It's also important to point-out, that the original effort to get the garden going was truly a GRASSROOTS effort, with merely a handfull of neighbors getting together that had a desire to take a symbolic stand against all the illegal activity that was occuring on that particular street corner.

It was simply a matter of neighbors deciding that enough was enough and it was time to take matters into their own hands. They did, and this is the end result of that effort. Most of those neigbors still live in the neighborhood. Seven long years later......

Ah. Substitute the idea of "original" with "current."

I changed the text according to your feedback, so it reads as follows:

"First, word is the sign is not going ANYWHERE. Just because there are improvements doesn't mean everything changes."

the sad thing is that councilmember hofstede has not come to the south hawthorne community garden once.
i am just saying. where are you dianne?

I do not remember any original sign. The sign is old and could use a touch-up on the stencils (2003). Plus, I think that I painted it with interior house paint (that is the color of my old kitchen). I made it with a couple of the neighborhood kids...DJ and Maurice. Dennis Plante contructed a very nice structure next to the sign that is a billboard that currently hosts all of the pictures and announcements. Kelly

Well, if the sign is the FIRST sign then it's the ORIGINAL sign, even if the sign wasn't installed at the time the garden was started. But that does cast some confusion on the word "current" because that's the only sign that's ever been there.

Now I have to change the text AGAIN.

So, is it my understanding people are no longer going to garden here (plant veggies etc.)? Why not? Is this more like a mini park now?

Kevin, the Jordan Community Garden has always been more of a showcase, park, gathering spot rather than a place to grow food. In the past few years the volunteers have been few, and those who have stuck around have been spread thin, and the garden wasn't being worked on like it needed. So there was part of the garden that was being used by some ladies who were interested in growing some veggies, and I think they even started to grow elsewhere.

So this wonderful initiative by neighborhood leaders along with Tree Trust and Pohlad Foundation is restoring the garden back to the beautiful showcase and gathering spot that it was meant to be.

Thanks everyone involved in the restoration!