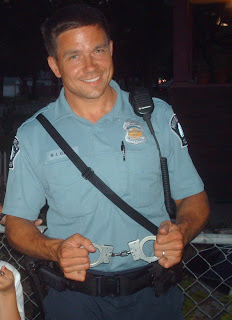 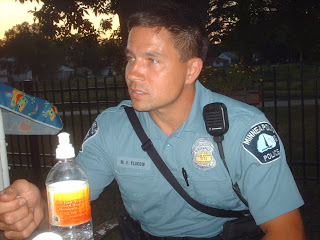 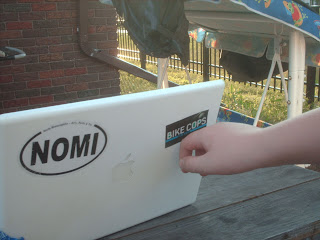 Photos By John Hoff
MPD's Officer Mark Klukow spoke to me a couple days about about the innovative bike-helmet-giveaway program (what I've dubbed "Helmet Heroes") but, during that same conversation, I had another pressing issue on my mind...
I wanted to know what was behind the recent dramatic drop in Minneapolis crime, particularly North Minneapolis crime. Though Klukow is not a spokesman for MPD, I figured he did have an opinion and many folks in NoMi have told me about Klukow's intelligence and insight. Turns out he's not just a pretty face but, well, the top photo is published especially for those readers who DO like to think of Klukow as a pretty face. As I've mentioned before, Klukow has a bit of a following in North Minneapolis, like he's a movie star or something.

A recent STrib article attributes the steep decline in crime to three causes: the impact of the foreclosure crisis in moving population out of North Minneapolis including (but unfortunately not limited to) some very serious thugs. I can't help but think of the demolition of the "Apartment Complexes of Anarchy" near the Hawthorne Eco Village. Suddenly that once-blighted area has gone from being "ground zero" for crime stats to a state of having nearly no crime at all. Something very similar has happened with 26th Ave. N. in the Jordan Neighborhood.

You really have to wonder when FIRST TIME HOME BUYERS are going to mentally catch up with the steep decline in North Minneapolis crime coupled with bargain basement home prices on charming 100-year-old homes with roomy back yards.

Second, the STrib article credits the work of the police in cracking down on crime, particularly violent offenders.

Third, the STrib credits the work of the Peace Foundation, which is run by Sondra Samuels, the wife of Council Member Don Samuels. Actually, the STrib threw all the credit to Don Samuels and didn't mention his wife, but some folks have asked me to remedy the error: it is, in fact, Sondra Samuels who is the driving force behind the Peace Foundation.

In reading the article, my first reaction was this: I can understand the impact of foreclosures and smart, energetic police work, but explain to me how the Peace Foundation should get just as much credit as the other two factors? This is the question I had for Mark Klukow.

Klukow then expanded on the notion of who should be given credit for the dramatic drop in crime, in particular a drop in murder. (Click here for a very enlightening bar graph) Klukow said the credit is "like a big pie" and, in his opinion, more than three causes should be getting "pieces of the pie" or, as Klukow put it, "at least slivers." He dubbed the Johnny Northside blog a "pie sliver."

Klukow said credit should be given to "anybody putting energy into the problem."

Here are some places where Klukow said credit is due. First, the Violent Criminal Apprehension Team (VCAT), the Violent Offenders Task Force (VOTF) and the Community Responsibility Team (CRT) unit in the 4th Precinct. A guy named Shane Price has worked to get hundreds of guns off the streets. There are also many church projects having some kind of positive impact.

Klukow said even blogs deserve some of the credit. Indeed, there is plenty of "pie" for everybody who is playing an active, helpful role. If you're part of the solution instead of part of the problem, pat yourself on the back.

Klukow sees the future of West Broadway as being, hopefully, something like 50th and France. (Click here for more info) He is very hopeful about the future of NoMi. At the dinner table, one of the hostesses asked Klukow about the idea of public entities like the city and county selling foreclosed homes to police officers for a dollar, so the police officers would move to North Minneapolis.

Klukow thought the idea had both positives and negatives. Obviously, it's would be a great deal on a house in a rapidly-revitalizing neighborhood. But Klukow thinks you'd never want to LIVE in the same neighborhood where you're a cop. Klukow points out he's arrested hundreds of bad guys, and they're often out on the street again within a day. Why would he plunk his family down in the middle of a bunch of criminals he'd arrested?

Once again, here's the blog of Klukow and his partner (click here). Remember, this summer kids who wear their helmets with a "bike cops" sticker may win a prize.

Posted by Johnny Northside at 10:21 AM

HA!HA! This is GREAT!

I love the picture of the guys trying to look tough!!

Hey Klukow, Let us know when you want to hit the corner of Penn/26th and we'll round up a bunch of neighbors to help the guys 'look tough'!