Jordan Pond "Hooker Lookers" Work To Clean Up Their Neighborhood... 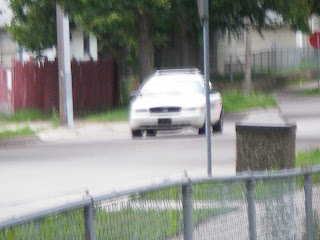 There continues to be heavy hooker activity at 2700 Morgan Ave. N., which has reached a point of being so annoyingly open that some residents begin to find it comical. A couple nights ago, police briefly arrested "Amanda," a slightly-overweight white woman in her late 20s whose face appeared to have taken a hard blow recently...

As one of the members of the Elite Whorehouse Patrol Unit (EWPU) pulled on a rubber glove, he was heard to say, "Yeah, they're thick tonight!" and then a moment later, "Oh, there goes Angela." The same night, three patrol cars appeared to raid an address known as "the brown House" where both drug and prostitution activity appear to be taking place in the alley, picking up some of the slack from 2700 Morgan Ave. N.

Some individuals inside the brown house were seen to run away with trash bags in their hands moments before police arrived, causing suspicion that either the residents had a police scanner or they noticed a citizen go up to the door and check the number before calling 911. Despite this "scattering like cockroaches" (as one resident described it) police were inside the "brown house" for a substantial amount of time.

Individuals are observed to move freely from "the brown house" and 2700 Morgan Ave. N., also known as "the salmon house."

Last night, residents observing from a hidden vantage point had to avoid wetting their pants with laughter as a hooker wandered down the street, THEN sat on a resident's lawn, THEN wandered back while doing dance moves with her flashing cell phone, THEN trespassed to sit on the back steps of another resident, THEN walked in (I swear!) bow-legged fashion toward Penn Avenue, which has been a rancid buffet of hookers for the past week or so.

After residents managed to quit laughing and call 911, police arrived relatively quickly and were seen to look high and low for the hooker with a searchlight, but she was probably already blowing somebody in a car by then. The drug and prostitution transactions are taking place so fast that by the time residents call 911, they're describing the NEXT transaction and not the one they called about.

Fed up, some residents have begun to shout "KEEP MOVING!" at hookers and their customers, and recently razzed a hooker who was seen to squat under a light pole and urinate in plain sight.
Posted by Johnny Northside at 10:55 AM