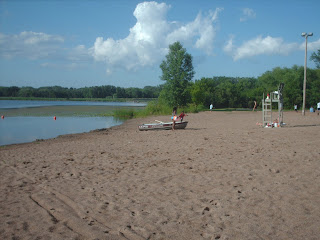 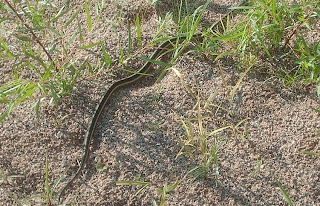 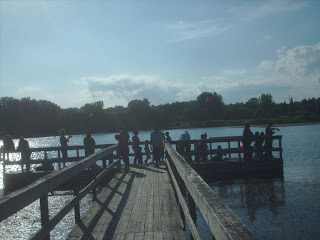 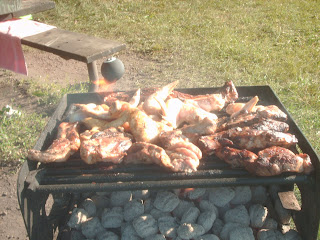 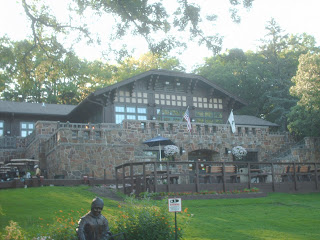 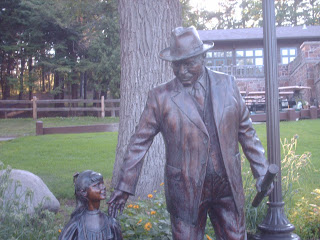 Theo Wirth Beach is pretty humble compared to many of Minnesota's beaches...heck, even compared to many beaches in the Twin Cities, which is the "City of Lakes" within the "Land of 10,000 Lakes." But it's very adequate for a cool dip on a hot day, especially with small children. My word, I remember being five years old and my father convincing us that we were getting in the car and driving to a beach in Hawaii.

(And, furthermore, it was my weighty responsibility to be on the lookout for Japanese warplanes)

So you don't need much to have an adequate beach. Does North Minneapolis have a beach? Well, I say Theo Wirth is our beach. True, the beach is several feet or yards outside of...

...North Minneapolis, part of the City of Golden Valley, which is not as close to paradise as you'd think from the name, but not as far as one might cynically assume, either. This much I'm confident of: if NoMi decided to forcibly annex Theo Wirth Beach, those wussies in Golden Valley wouldn't stand a chance. What would they do? Go cry to Uptown about how North Minneapolis took what was rightfully theirs? Boo hoo.

I mean, what would it take to forcibly annex this beach? A flag of territorial conquest, a handful of sand triumphantly grasped and held aloft by somebody acting under color of law, some photographs to give proof as one would document a moon landing? I say Theo Wirth Beach is up for grabs, and I might do the grabbing, personally.

Anyway, these photos show a recent outing to this amazing and shockingly underused beach. The top photo was actually taken ON THE FORTH OF JULY while the sun shined brightly overhead. Yes, the park was full of people but most of them were listening to a band and shooting off firecrackers. Also, there had been rain shortly before, which caused the beach to become empty.

All the same, I think the surprisingly-empty photo above is an amazing testimony to how under-appreciated this beach is, and what an amenity it could be for NoMi if only more people knew about it.

Which is where, I figure, this blog comes in...

So about the next few photos. Well, that's a garter snake which my son spotted in the flora near the beach. He kept saying he'd spotted a snake and I was all, like, take a picture of the snake and I'll give you a buck. Well, here's his picture.

The next image shows the very popular fishing dock, which is a good ways down from the beach. I didn't see anybody catch anything while I was there, but everybody had that look on their face like a bite would come any minute. In the next photo, well, that's some kind of crazy modern art pine cone thingy my 12-year-old made, after I told him something like, "Run on the beach and frolic like a normal kid or I swear to God I will take that computer away from you, because it is rotting your brain. Bring me a pine cone or something. Convince me you are a normal kid, Alex, and not a cyborg hooked in to SkyNet if you know what's good for you."

Words to that effect. I am dedicated to The Truth around here, and heck if I'm going to publicly pretend like my son and I never have our moments of conflict when a rather pointed father-son talk is necessary. But then Alex got into chasing after the snake and making some crazy thing out of a pine cone, so I told him, "Well, either you're normal or you're putting on a really good act to get what you want. Either is quite acceptable to me at this point. So good job."

In the next photo, chicken being grilled up near the fishing dock, where permanent grills are conveniently located as they are all through the park. Next, the park building where I am told many kinds of social events are held. The statue is Theo Wirth, who pioneered the amazing park system in Minneapolis. As a gesture of respect, I cleared cobwebs from the eyes of the statue. God bless Theo Wirth and his vision of the future, which is the present in which we reside and enjoy the fruits of his labor.

Posted by Johnny Northside at 5:52 PM

I actually consider Theodore Wirth part of N MPLS. If you hadn't have told me otherwise, I would have never known. And while by technical boundary lines, it may be just outside, historically and culturally, it is part of the fabric of N MPLS. It was designed as part of the Grand Rounds system, which is a feature of MPLS. In fact, the age of the park (as evidenced by its gorgeous structures) predate Golden Valley. It then would have simply been undeveloped countryside. So it was designed and built to be a feature of N MPLS and for the enjoyment of the residents of N MPLS. Sure since that time Golden Valley grew up immediately adjacent and there may be technicality issues of jurisdiction or whatever - However, it is without dispute that since its creation - historically and culturally, Theodore Wirth Parkway was designed to be a feature of N MPLS. It doesn't even need to be claimed. That is what it is. I actually found it shocking that by technicality, it was not.

Here's a link that talks about some upcoming improvements to the beach.