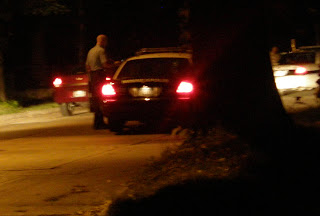 Last night, around 10 PM, I witnessed part of a police chase involving an apparent stolen vehicle, a red 4-door sports car. The chase--which seemed to stay below 50 mph at the point I was watching--proceeded westbound on 22nd Ave. N. and ended when the suspect bailed near 22nd and Irving Ave. N.
It appeared more than half a dozen police vehicles were involved.

According to a non-police source, who heard it reliably at a meeting of neighborhood leaders in the Jordan Neighborhood...

...the suspect tried to hide under a porch but was found by a K9 unit which "took a bite out of crime."

Email ThisBlogThis!Share to TwitterShare to FacebookShare to Pinterest
Labels: crime

And God Bless their K9 dogs too...

This actually ended on Hillside Avenue North after a foot chase. The suspect was transported to the hospital after the K9 was through with him. Way to go, DAWG!!!!