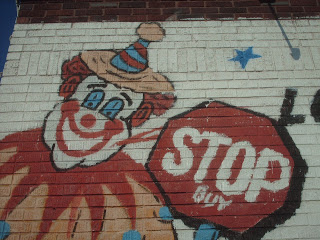 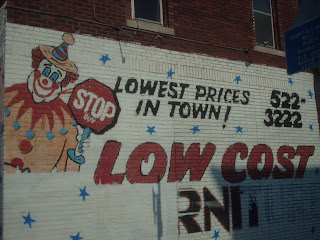 Revitalization is happening so rapidly along West Broadway--at least in terms of very big plans being announced--that at least one resident is already asking this blog to make a plea to save a colorful reminder of the area's historical past, specifically the "psycho clown" on the side of the old furniture store.

Ah, yes, just look at him with his little sign...

Yeah, I figured you'd get it.

And, actually, I don't know if the psycho clown has a name, but I racked my brain and came up with "Loco" because it sounds like "Low Cost" and, well, we know this clown likes puns. Sure, we don't know a heck of a lot about the clown--in particular why he has made a career of standing on the roughest part of West Broadway--but that one small piece of information we definitely do have.

Maybe my bloggy little plea won't be enough to save him. But at least I have a picture of the clown so people can remember him.
Or, well...in case he needs to be positively identified.
Posted by Johnny Northside at 7:14 PM

Down with the clown...they scare me!

Undoubtedly some of his friends:
http://quick-content.com/?p=66

That was my grandpa's store and I just found out, his name was Happy the Clown. He was painted by a local kid in the Hawthorn area.

If that's true, we'd all love to know more. Please don't take the "psycho clown" jokes too seriously and tell us what you know about our neighborhood history.

The clown, sadly, has been painted over a while back.

The owner of the building was Bill Franklin (gramps) and he owned it for 30+ years. Unfortunately, in 2006 he passed away and the business closed. I do appreciate the residents of the area trying to save the clown, it was a little piece of history that will be missed.