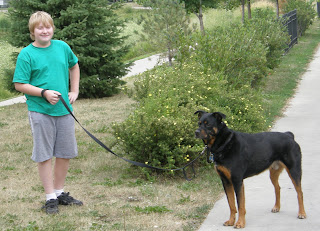 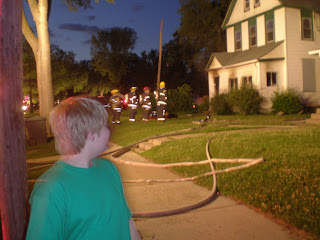 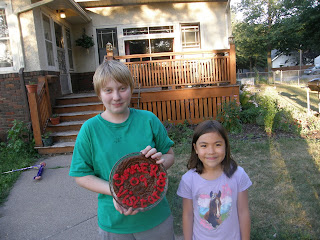 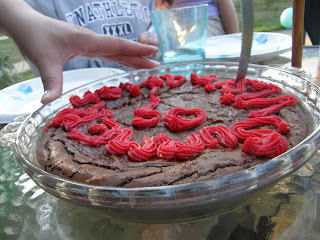 OK, admittedly my son didn't write an essay with a title like that. And I'm not sure if the "What I Did This Summer" assignment is still a staple of primary education, a surefire way for a new teacher to assess student writing skills at the beginning of a school year.

Readers have been very tolerant of the way my 12-year-old son, Alex, kept popping up in numerous posts for five weeks but, hey, everybody knows the blog is dedicated to my child.

In fact, the WHOLE POINT of moving to North Minneapolis was to live near my son in a place where I could afford to be a home owner, after a messy divorce that, well, certainly wasn't as bad as SOME divorces. I've always made it clear my ex-wife is not just a GOOD mother to my child, but an EXCELLENT mother.

But it's very interesting, sometimes, to see the reaction of a child raised in a prosperous, BORING suburb to life in North Minneapolis. His response to the ice cream man?

...buy ice cream from a VAN driving around in the STREET?" His reaction to a loud, colorful argument in the street? Barricade the door and hide inside.

But those five weeks were transformative for Alex. He met a United States Senator and listened in as the leaders of the neighborhood discussed, vented, plotted and planned to turn dystopia into utopia, absolutely assured of success as an inevitable tidal wave of revitalization moves us forward. Alex watched a dramatic police raid, a bridge demolition, and even a former crack house burning. Even in a mere five weeks, the neighborhood changed dramatically, so imagine what changes will happen between now and June of 2010, when Alex will return for another long visit? (Of course, he constantly makes SHORT visits, so it's not like he's really GOING AWAY, though at the end of five weeks it can almost FEEL that way)

Alex became a different kid at the end of those five weeks, and not just because I didn't bother getting him a haircut. The place we call "NoMi" became his home as much as the suburb where he resides. NoMi became an inextricable part of his identity. In fact, Alex paid this place what is, for him, the ultimate compliment: maybe North Minneapolis would be a good place to build his factory, the one where he will manufacture robots and become a zillionaire.

And, of course, he learned to love the ice cream man with obsessive devotion, and he began to realize colorful arguments out in the street were merely a kind of "bonus drama." Enjoy it while it lasts, I'd tell him. The neighborhood is changing, every moment, and we're the ones helping to change it. Someday we'll grow nostalgic and miss this crap.

I want to thank all the people in my life who welcomed Alex into their homes, people whose connection to me (and therefore to Alex) is love for our neighborhood. In the spirit of my friends and neighbors, I offer up this essay of what my child from the suburbs MIGHT write, if he were given such a writing assignment.

What I Did This Summer In North Minneapolis (NoMi)

My dad lives in North Minneapolis so he can visit me all the time. Usually, I see my dad every other weekend and some holidays like Christmas. But in the summer, I'm supposed to see him for five weeks.

But I've never seen him for the whole five weeks before. One time I stayed for two weeks with some of my dad's family out in the country on a gravel road, where they don't believe in television or video games and they read Little House On The Prairie books for ideas about fun stuff to do. I'd rather stay with my dad, who loves computers almost as much as I do. My dad is a blogger. He writes about trying to make his neighborhood better. But I'm lucky the neighborhood wasn't always so good, because my dad got a house for not a lot of money before lots more people started to believe in the neighborhood and tell all their friends.

So now my dad has a nice home near me instead of hundreds of miles away, so it's easy for him to see me. North Minneapolis doesn't seem so near sometimes but it's a lot closer than North Dakota or Seattle, where I was born.

My dad and his friends call North Minneapolis "NoMi" and they work together to make their neighborhood better, like by getting rid of crime and planting flowers.

On the first day of our five weeks, we rode the light rail from Mall of America all the way to the end, then walked to Pizza Luce to have a brownie sundae. The street signs near Pizza Luce say "North" on them, but you have to go a little further to be in North Minneapolis. If you go to the new baseball stadium, you're in NoMi.
On the first day, my dad took me to a trial for a guy who cheated people out of a big bunch of money, by lying about stuff with mortgages, which is what people pay to get a house if they can't pay the money all at once. My dad said people like this hurt North Minneapolis, and this is one reason there are so many empty, boarded-up houses, but police detectives are solving the crimes and arresting the criminals.

My dad's friends in NoMi don't live in boarded up houses. Their houses are nice like the houses in my city, only older. Their houses are about a hundred years old. Their yards are big, which is good if you want a dog.

In NoMi, a lot of my dad's friends have big dogs. I played with these dogs a bunch.

Some of the coolest things I did were these. Saw a bridge blow up. Saw a house burn that people used for selling drugs. Saw police raid a house. The last one was the best! The police threw a flash grenade in the front door and I was so close I could feel it in my chest! BOOM! I saw lots of cool police action. Once we saw somebody arrested when we were just trying to buy a chocolate shake! I even helped my dad interview some police for my dad's blog.

Plus I learned how to use a lawn mower. I saw a lot of movies with my dad. My dad got sued but he said not to worry about it and actually thought it was kind of funny. I went to the beach near NoMi. I helped collect bugs near Jordan Pond. At the end of visitation I had a brownie sundae, just like at the beginning, and everybody was sorry to see me go.

I had a lot of fun but next summer in NoMi I want more rockets.

Posted by Johnny Northside at 4:31 PM

That was really sweet, Johnny. It was nice meeting Alex this summer. And if I ever need a petsitter, you know I'll be calling you.