Reports Of A Riot In World 23 Of Runescape... 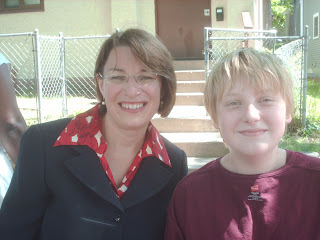 My son Alex Hoff (who is on extended summer visitation in NoMi for about another week, pictured above with Senator Klubuchar) today reports there was organized "rioting" activity happening in one of the virtual worlds of "Runescape."
(www.runescape.com)
The rioting by players was in response to some "updates" to the site which a great number of players disliked intensely.

Alex explained to me that...

...the powers-that-be who are in control of Runescape instituted some changes, some of which were as follows. First, you lose all items upon death, no exceptions, not even "prayer." Also, there used to be a trick called the "26 K trick." If you killed the other person you got a lot of money, like over 500k in gp, which stands for "gold."

Now--under the new system of updates--if you "kill" the other person, the minimum risk is 75k and it has become much harder to raise your "ep," which stands for estimated potential. (Alex tells me it would be much easier to explain if I knew diddly about the game, sheesh)

In short, there were changes and thousands of players disliked the changes so much they actually organized a riot. When rioting, players run around energetically shouting strings of "@" symbols which reportedly slows down the system somehow and they say "Ruinscape" to convey the idea the game is "ruined." This organized activity is intended to convey their dissatisfaction to the controllers of the game and, hopefully, force revisions.

In the chat forums of the game, things were being said about precious items being lost and there was even profanity. My son Alex estimates as many as 20 players may have been "muted" over the rioting incident, which means they aren't allowed to speak.

There have been previous reports of riots in the Runescape world, including this snippet I found on YouTube, click here.
Posted by Johnny Northside at 2:42 PM

Email ThisBlogThis!Share to TwitterShare to FacebookShare to Pinterest
Labels: Runescape

Here is another example of documented "rioting" on Runescape to force revisions.