Having A Dialogue With Lennie "The Heckler" Chism... 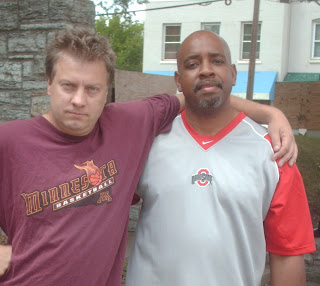 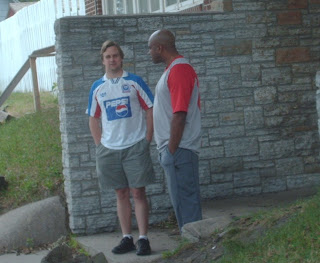 Hawthorne Housing Director Jeff Skrenes dug up some interesting information to add to the current debate about tearing down Uncle Bill's in light of the last-minute, seat-of-the-pants plan by Lennie Chism to save the building, which Chism has now confirmed he bought for $3,000.
Skrenes told me the headquarters of Lennie's outfit--Springboard Development Corporation at 1901 Glenwood Ave. N.--has been foreclosed and is beyond redemption.

Of course, Lennie still uses that address, even in the email he sent me yesterday. So a few hours ago Jeff thought it would be fun to go to 1901 Glenwood and eyeball the property.

While we were both scrutinizing a mailbox that said "Chism," who should come waltzing out of the door but Lennie "The Heckler" Chism himself...

So Jeff, Lennie and I had a dialogue there on the sidewalk.

Lennie said a lot of things, and if he wants to say a lot more he can use the comment threads. However, Lennie confirmed he no longer owns the building...that it did indeed go into foreclosure for approximately $35,000...but Lennie says he has a "good relationship" with the bank so he keeps "using" the building. The question in my mind was "using it for what?" since there's no business license at the address. Lennie says he doesn't need a business license since he's (and I quote) "not doing anything."

Lennie repeated a bunch of his points about the building formerly known as Uncle Bill's, including the idea that his proposal shouldn't be opposed by people who don't have a better alternative. To which I say an empty lot full of grass is a better alternative than a pipe dream blowhard like Lennie trying to run a store at that accursed location, because Lennie doesn't have the jack to pull it off and the whole thing will go sour. To my alternative I would add the following: Swingset. Slide. Monkey bars. And maybe some kind of small farmer's market there on the grass, from time to time.

There. That's my alternative.

Lennie talked about how his "relationships" were going to bring about something good at the old Uncle Bill's location, and claimed to have a "relationship" with MCTC that would be helpful. Lenny went on about how "everybody said" he couldn't buy the building for such a small amount of money, but he had proven them wrong, and proceeded to grandly compare himself to Louis Pasteur, the inventor of pasteurized milk.

I told Lennie he was, in a phrase, absolutely full of bulls**t and I predicted that if anything were sure to doom that building, it was surely Lennie's surprise ownership. I said the comparisons to the situations at Wafana's and Big Stop are painfully obvious and I said he not only lacked enough financial jack, but enough political jack as well. If Lennie could pull off something like what he was proposing at Uncle Bill's, I asked, why couldn't he come up with $35k to save his own headquarters from foreclosure? Why couldn't he replace the window on his building which was full of holes from an air gun?

Oh, wait. He doesn't actually OWN that building. Where's the incentive to fix it? I should have said his FORMER building. But, hey, the bank still allows Lennie to use the building, Lennie says.

Lenny talked a big line about individuals who "just want to tear down instead of build up." As he talked about how he had single-handedly cleaned up the intersection near 1901 Glenwood, a woman who was obviously hooker wandered into view and tried flagging down cars. (Even Lennie appeared to agree she was a hooker, but said if he went there and talked to her, she'd move down the street. I pointed out the same was true if Jeff or I talked to her. Either way, she'd move. While we ignored her and debated, she moved along on her own)

At one point, there was a long discussion about "where does crime go" if it's just "driven out" of a neighborhood, instead of the neighborhood "engaging" individuals to turn their lives around?

The question becomes "How responsible and capable is Lennie 'The Heckler' Chism?"

One answer appears to be: not capable of saving his own building from foreclosure for a mere $35,000 so what will he do about a House of Horrors like Uncle Bill's? Lennie talked about putting in a "green house" at the location. To which I said (pointing at the window behind Lenny, full of holes from an air gun) "Well, there's a piece of glass you can use...oh, wait, you can't use it! Because it's full of holes and, besides, IT DOESN'T BELONG TO YOU."

Words to that effect.

Sounds like fun.
Posted by Johnny Northside at 3:31 PM

I'll try to post about this later, but it's my 12-year-old's turn with the computer. Jeff's email communication as follows:

The place went into foreclosure on 8/19/08 and the redemption period ended 2/19/09. The amount owed was $34,879.57, The mortgagor was Glenwood Enterprises and the lender was Capital Lending Group.

Capital Lending Group is listed as the current owner. The property is zoned for commercial use, yet there is no business or rental license currently
issued there. I will say this much: Unlike Ben Myers, whoever is responsible for this place IS paying their property taxes on time. Although
that could be simply because the foreclosing entity paid them prior to or on the date of the redemption period ending.

The info above pertains to 1901 Glenwood Ave. N.

The college he mentioned was MCTC, if I remember correctly. Minneapolis Community and Technical College.

Yes, now that you say it I remember him saying it. I will improve the text accordingly.

Upon reflection, here is one other critique of that conversation:

He claims he used his "connections" and "relationships" to buy the building for only $3,000. I think he also said it would cost $70,000 to demolish. I'm not sure if that's an accurate amount or not, but a typical house usually costs $14-20,000 and this is a much bigger and more involved demolition.

Well, in all likelihood that vacant lot would NOT be worth $70,000. So if I owned a property with a pending demolition that would put a special assessment on the place for far more than its market value, and someone came along with an offer to buy it, I'd JUMP at the opportunity.

The only "connection" needed here would be a relationship between the owner and someone willing to risk three grand.

ok, there goes my opinion of MCTC--if in fact they've ever even HEARD of lennie "it's-not-a-lie-if-YOU-believe-it" chism.

Lennie claims that Springboard Economic Development Corporation is a 501(c)(3) organization and can receive tax-deductible donations. A search of the Minnesota Secretary of State database does list Springboard at the 1901 Glenwood Ave address and says it is a Minnesota non-profit. However, the Attorney General's web site does not recognize Springboard's name at all. Charities are required to register with the Attorney General's office annually and to send a copy of their 990 with their registration.

So what gives here? Is Lennie lying about the 501(c)(3) status? If you want to be very bold, Johnny, you might meet Lennie at his "office" again and ask to see a copy of Springboard's 2008 Form 990 tax return. Non-profits are required to keep them on hand at their office and to provide them on request to any member of the public who requests a copy.

Sometimes people confuse becoming a state-recognized non-profit corporation and being a 501(c)(3) tax deductible organization. The latter requires a whole lot of paperwork and the designation is given only by the IRS.

Yes, well, maybe the "committee" that Al McFarlane created tonight might ask about that, but somehow I think only 1 of the 5 members will be interested in asking any pointed questions.

What happened last night?
I have a feeling with WHO we are witnessing the birth of yet another organization who's soul purpose is to line the pockets of a few.

It would be so nice if you could get the mans name (Lennie....not Lenny)right since you've taken it upon yourself to bash him at every turn.

In re: Lenny vs. Lennie.

There has been a "Lenny" or two that gets through the sieve, but when I catch that I correct it.

I have, however, never misspelled his nickname: The Heckler.