Level 3 Sex Offender Stuffed And Mounted Like A Trophy Fish, An Object Of TERROR and WARNING To All North Minneapolis Sex Offenders!!!! 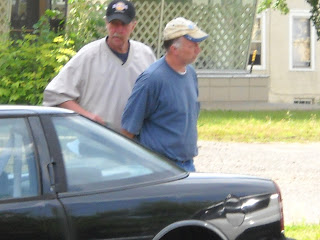 Peter Rickmyer, a.k.a. "Pete The Pedophile," could have lived a low-key life in North Minneapolis, checking in with his probation officer in a surly-yet-dutiful way, and generally minding his p's and q's so the non-sex-offender world wouldn't lower the boom on his miserable, deviant hide.

Instead, Peter went around trying to slap a restraining order on a member of JACC, and he generally frolicked around violating his legal boundaries.

Earlier today, Peter was cuffed and stuffed after (apparently) mere precious hours as a fugitive, if he even KNEW he was a fugitive, more's the pity.

I do not see this is an isolated event unique to the overly-outgoing personality of "Pete The Pedophile," who clearly has a screw loose. No, rather, this is part of a bigger trend.

At one time, unfortunately, North Minneapolis was a dumping ground for a lot of social problems, which is one reason why...

...there are an unusually high number of Level Three sex offenders here, like Pete Rickmyer and (until he apparently moved elsewhere) Junaid Maalik. For a long time, there was a dominant social norm of "look the other way" and "don't snitch." But now the norms are changing. Though some neighbors ALWAYS gave a damn and put DECADES of energy into the neighborhood, now there is a kind of critical mass, a kind of tipping point.

And who is caught in the middle of this massive social change? Thugs. Drug Dealers. Hookers. And, it would appear, certain Level Three Sex offenders.

Who are apparently not allowed to be on the internet. So somebody might want to pass the word to them: North Minneapolis is dramatically changing. Abide by the terms of your probation, or FACE THE CONSEQUENCES.

You might even want to think hard about living somewhere else.

Posted by Johnny Northside at 10:02 PM