This Weekend Is The North Minneapolis Art FLOW... 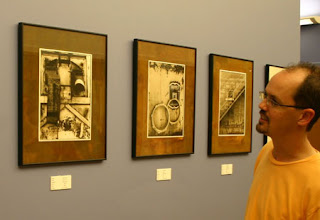 We haven't yet experienced this weekend's North Minneapolis Art FLOW, which I'm sure will be wonderful, and here's a website with the details, click here, but I'm already thinking of how it could be better.

Let's have a stage featuring debates over the colorful political issues which make North Minneapolis so much more fun than the dreary, boring suburbs! We could have Mayoral Candidate Al "I Am The Community" Flowers giving a talk about how...

...it's political oppression that he is forced to pay his water bill like everybody else, or suffer the consequences. Sure, I know Al Flowers actually lives in South Minneapolis, but he's kind of a fixture of North Minneapolis politics so, I say, let's put him to work entertaining us ON PURPOSE instead of BY ACCIDENT. As part of the same "political sideshow," we could also have Council Member Don Samuels debating four political midgets.

And, as the dramatic finale of the show, we could have "Uncle" Lennie Chism in a free-for-all debate with 75 percent of the residents living near the old "Uncle Bill's" location, arguing the fate of that building. In the middle of the show, somebody rolls out a big video screen which shows--GOOD HEAVENS!!!--a wrecking ball smashing the building to smithereens! (Click here to guess the day and hour of the demolition)

Yes, we have colorful politics in North Minneapolis. Lately, it seems the politics are more intense than usual because everything--the fate of our neighborhood for decades--is being decided within a relatively small span of time through demolitions, sales of numerous vacant properties, and revitalization plans being announced like the World's Largest YWCA. In the midst of this positive change, some are fighting to save rancid remnants of the troubled past like the old Uncle Bill's store. This anti-revitalization fight may grow very loud--especially prior to the November city council elections--but the trend toward revitalization is too deep, and possesses too much traction, to fail.

This weekend's Art FLOW will be an opportunity to take a look at how far we've come, and celebrate how far we're going, as all kinds of new faces arrive to take a peek at NoMi and enjoy this grand event.

Posted by Johnny Northside at 4:12 PM

I'm anxious to hear more about the Kenya McKnight/James Everett secessionist platform. Maybe we won't have to pay our water bills in the Independent Municipality of Northsideville!

Hey, Johnny is actually promoting something healthy about the North Minneapolis community!

I don't know about turning FLOW into a political mud wrestling tournament, but I had a hellofa good time this year, again!

Here's the photos to prove it: