Doooooooooooom On The Horizon For Uncle Bill's Store!!! DOOM, I SAY!!!! 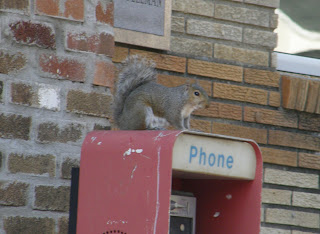 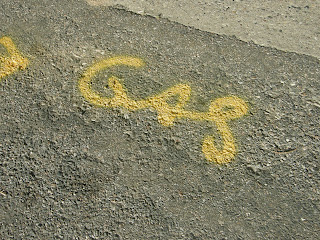 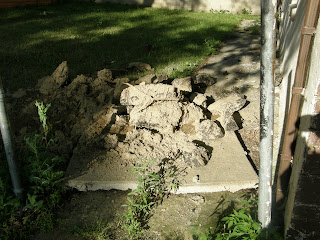 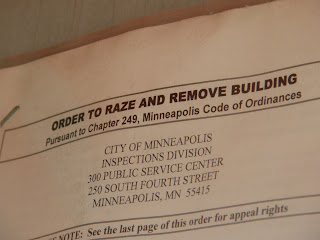 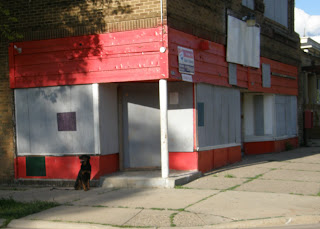 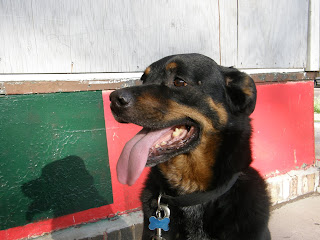 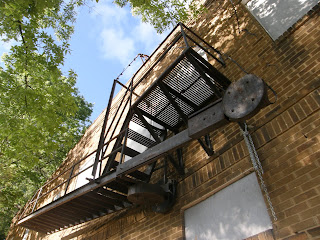 Photos By John Hoff
Chipper The Entrepreneurial Squirrel Says, "You paid $3,000 for this building? Lennie, you're NUTS!!!!"
So, yeah, I went by the old Uncle Bill's store a couple days ago--which is now owned by Lennie Chism, therefore "Uncle Lennie's"--and took note of new spray paint marks in the street which show the locations of buried gas lines. This kind of thing appears when demolition is pending.
(If you want to take a shot at guessing the exact day and time the building goes down, click here)

I had a friend's rottweiler along with me, and so I posed the doggy next to the doomed building (DOOOOOMED!!! DOOMED, I SAY!!!) in a kind of "before" shot. Later, when there is a big hole in the ground...

...and lots of new, interesting smells of fresh earth and worms for the Rottweiler, I'll snap an "after shot."

Also shown in these photos: the fire escape at Uncle Bill's, which certainly has some scrap metal value, quite possibly the most valuable part of the whole building. The "weird little pile of dirt" which appeared behind the building, which appears to contain chunks of asphalt. The exact purpose and origin of the dirt and debri is unknown, but my speculation is the stuff was dumped there to use for "fill" when the utilities get dug out of the street. Which (and I think I've already emphasized this?) will happen as part of UNSTOPPABLE AND INEVITABLE DEMOLITION, and guess-the-freaking-hour for eternal blog glory.
Posted by Johnny Northside at 10:40 AM

Did Chipper get a parking variance for sitting on that phone box? We all know there's no off-street parking available at that property....

Chipper says you can park in his tree and pay him just PEANUTS!!!!

Chipper says, "Maybe Anonymous 12:36 will be lucky enough to have a con artist scam Hennepin County into using taxpayer dollars to fund a glorified convenience store on YOUR block without any parking lot for all the cars parked outside all night with their motors running to facilitate pealing away from the curb super loudly whenever rival gang members show up!"

Driving by yesterday, I saw a tree in a pot, like it was about to be planted between Uncle Bill's and the next building (there is a vacant space between them). I wondered if somebody was trying to make "an improvement" to the property. Don't think it will be enough to stall the backhoe of doom though.

Chipper says, "THAT'S MY TREE and the best part is LENNY PAID ME TO PLANT IT!!! Sure, Lennie is nuts, but somebody is always MAKING money, somebody is always LOSING money, and if you're a self-made squirrel entrepreneur such as MYSELF then you gotta love a nut with MONEY in his hot little hand!!!"

Chipper also says, "Few people love squirrels as much as Johnny Northside. Why, he even practices 'critter composting' by giving stale Doritos, etc. to his furry rodent buddies! So support Johnny Northside through the PayPal button, baby, 'cause Chipper is sure to get his cut!!!"

Did you know the city was using stimulus money to tear down the building? Lennie does not have to pay for it, we do. Well, our kids do for the next billion years. Still want it torn down? Oh, if it is zoned for residential, why not just use the building for housing?

Yes, I want it torn down. You seem to be quite misinformed about the state of the building. Aside from structural deficiencies (even before Ali removed the load-bearing wall between the two sides of the store, a giant metal plate had been screwed into the front of the building (visible in photos) to try and keep the bricks from bulging any further out over the sidewalk), there has been sewage leaking from the apartments above into the walls of the convenience store for years. I'm a big fan of saving old buildings--that's why I live in one. That's why I'm thrilled that the church across the street is being rehabilitated. But, believe it or not, not all old buildings are worth saving. Improving our neighborhood by tearing down this unsalvageable drug shack is an excellent use of stimulus funds.

@Anon 809.... where are you getting that info? The taxpayers do not have to pay for the demo of Uncle Lennie's, the demo costs will be billed back to the current owner.

Also, supposedly the demo costs are going to be way above what was originally expected, and could be as high as 100K. Guess who gets to pay that?

If the city is paying to tear it down, it might have not been a bad investment on his part in the long term.
Better if it wasn't zoned residential, of course.
If his purpose was really to open some sort of a store or whatever, it was a horrid investment.

A good friend of mine had a great idea... how about salvaging the brick from the building for re-use, like garden walkways and such. Wouldn't it bit fun to have a bit of Uncle Lennie's in your backyard?

I suppose the bricks belong to Uncle Lennie now, and that's probably the last thing he would do with the bricks is give them to the folks that want the building torn down.

Chipper says: I'll sell the bricks to you for PEANUTS on the dollar.

with all the sewage problems that building had, the bricks should probably be treated as medical waste.