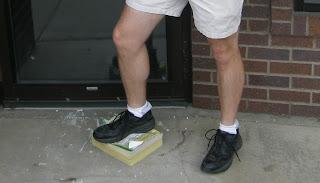 Down With Yellowbook
Stock Photo By John Hoff

I previously reported how Hawthorne's Housing Director Jeff Skrenes ("The Hawthorne Hawkman," pictured above) confronted some phone book dumpers from Yellowbook who were dumping evidence of wanton, wasteful tree murder on the steps of vacant houses. (Click here for that story)

After talking to Jeff Skrenes on the phone, Yellowbook sent out a truck and picked up 121 phonebooks from vacant houses. In addition, they took note of 64 Dex phone books sitting at the vacant houses, but didn't pick them up. According to Skrenes, "They are not allowed to remove the Dex (phonebooks) but informed us they believe the same delivery people worked for Dex when they were dropped off and THEY NO LONGER WORK FOR YELLOWBOOK." (Caps not in original)

This represents progress by Yellowbook. Clearly, the word is going forth that NORTH MINNEAPOLIS IS NOT HAPPY ABOUT ALL THE PHONE BOOKS DUMPED AT VACANT HOUSES.

However, our neighborhood leadership should not have to be tied up with this issue. The phone book companies need to STOP DROPPING OFF UNSOLICITED PHONE BOOKS, not making amends afterward.

Posted by Johnny Northside at 7:01 PM

Great work, Jeff. It's amazing that yellow pages companies can't tell the difference between an occupied and unoccupied home.