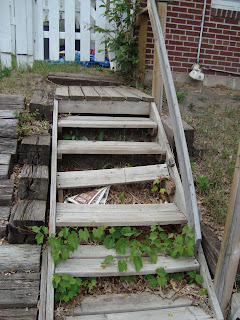 In the wake of his controversial plans to re-open the former "Uncle Bill's" as an organic food store, Lennie Chism fired off an email to a number of people, claiming "retaliation" by Council Member Don Samuels because an inspector came to eyeball the building Lennie "possesses" (but apparently no longer owns) at 1901 Glenwood Ave.

The email (with some punctuation fixes) said as follows...

This information was obtained from Ron Martin as he was taking pictures of the building.

It is clear, these tactics are designed to intimidate, and that Council Member Samuels will do any and everything (sic) to those who oppose his wishes in the 5th Ward. I look forward to asking questions of Samuels tonight as Ron Martin stated he would be at the public meeting 1315 Penn Ave. North.

Posted by Johnny Northside at 4:03 PM

If an inspector wants to come by my place of residence and look around, so be it. I have nothing to hide, I take care of my property and I have nothing to be ashamed of. If something isn't right, let me know, I'll fix it.

It seems to me an inspector coming is only a big deal if you're doing something wrong or are hiding something.


I suppose CM Samuels instructed Ricardo who then instructed Ron Martin to step on Lennie's toes???

CM Samuels is soooo predictable..
(this is what my sarcasm font looks like)

This can never be personal. Once that happens the person who your going after always wins.

Wouldn't you think that if you're pitching a plan to rehab a building, then an inspection of the state of the other buildings you own(ed) is not only relevant but completely prudent, and you should actually expect such procedure?

The fact that Lennie is incapable of understanding that the fact that he has allowed his Glenwood property to become an urban blight of exactly the type he is promising everyone that it is completely IMPOSSIBLE that he will allow the Uncle Bill's property to become is itself a clear indication of why no community should ever trust him to develop any property, anywhere. This is a disconnect so profound that, frankly, it makes him look like something of a psychopath.

I don't believe the purpose of the visit from the licensing inspector (if it was at the request of Council Member Samuels)was an act of intimidation.

As an elected official I would EXPECT that a council member would perform due dilligence/fact finding on a matter such as this.

If you find that intimidating Lennie, maybe being the lead developer on a project like this isn't your cup of tea.

LOL! Those steps look like they're from a cartoon!